Curds and The Way 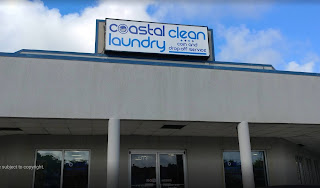 The Coastal Clean Laundromat in Leland, NC has pretty good WiFi and nice cool air-conditioning. Tonight, I didn’t get to enjoy either one for very long. Thursdays, I do laundry. The side gig has me working the dusty shelves of the shop at a construction equipment rental place. It’s six or eight mechanics, a couple managers, and me in a pole building, in Carolina summer, with a bunch of big fans, but no air-conditioning. It’s all right, but it’s dirty and hot.

After work this afternoon, I drove back across the river to Leland, picked up my supper and parked out behind the strip mall to peel off my work clothes. I pitched them in with the rest of my laundry, and got into flip flops, shorts, and a t shirt. Laundry night is the one night during the week I usually get something to eat rather than cooking. This week I chose to get some Chinese. I’ve hit and I’ve missed with the local Chinese place, but it’s across the road from the laundromat and probably the healthiest of nearby options. I got a couple veggie spring rolls and Szechuan-style Curds (tofu). The spring rolls were excellent and the curds were pretty decent too.

I got my laundry started but the mask mandate was back and I didn’t feel like eating my Curds inside anyway. It was already cool enough compared to work that I could sit in the van and eat. A bowl and some chopsticks were waiting for me. The spring rolls didn’t make it across the road and were already gone, so I got set up with some rice in the bowl and then ladled tofu and veggies on top. It was good.

Then the guy I had parked next to came back outside as well. He started talking to me about Van Life and Boats. I can talk for hours about either one. Then, somewhat abruptly, he asked me if I knew about the Gospel. He said he could explain the gospel in … (two sentences, three minutes, or something, I don’t remember).

“Well, I’m a Buddhist, but if you need some practice, go ahead,” I said with a friendly smile and continued to eat.

Then he went at it, full spectrum fire and brimstone. All the meetings, the trials, the second comings, the judgements, and the dispensations were paraded before me.

“Sounds complicated,” I said, “I like to keep it simple.”

Then the alarm on my phone went off. My washing was done. He followed me inside and began folding his neglected clothes out of the dryer.

“So who do you think Jesus was?” he inquired from across the expanse of the dryer area.

“A historical figure from the Middle East,” I said and smiled.

A little later he asked if I had a bible. “Oh, somewhere,” I said non-commitally. And then fearing a Super Christian bearing gifts, I added “but I don’t need one. I have no interest.”

With my clothes drying, I went back out to the campervan and had the rest of my Szechuan curds. Soon enough my pious new friend arrived carrying his tote tub of folded clothes.

He offered more proofs and rebutted himself without noticing. I smiled. Then he offered that Israel the country was a proof of some kind for something that god did or said (I don’t care enough to remember the details). I smiled and stated flatly that if god was in favor of the actions of the current regime in Israel then I was done with all of them.

After an hour and a half, he was testing my Zen. When he re-emphasized the fact that we are all sinners, born of sin, and that we don’t earn grace, it is granted to us by the whim of his creator dude, I said “hang on.”

“Anyone who has ever looked into the eyes of a child cannot square that with the so-called Original Sin. I categorically reject the original sin.”

“Well, see.  So does God. See, there is this period when a child is too young to know sin and if they die, they will go to heaven." Blah, blah, [some story about David losing a child].

“Cool,” I said, “so God agrees with me that there’s no Original Sin.”

“In my opinion, the bible is rife with contradictions,” I said, trying to measure the pace and pitch of my words. I was having fun and smiled while continuing to speak slowly. “That is good stuff for you because you obviously know the bible very well and you can wiggle out of any corner by plucking a verse from hither or yon.”

“Well ...” he started seeming to tire of trying to save me.

Then my alarm went off again; clothes were dry.

“Well, bless you,” I said, “I hope you get your dispensation. I’ve got mine already and I’m set. Thank you. It was nice meeting you.”

“You should think about the New Testament,” he said as his voice trailed off (It seems cool to me that I don’t have to read it, I can just think about it).

I started to walk toward the door of the laundry, but spun around and caught him, defenseless, closing his car door to leave.

“Remember that you told me that god would remember all the people he had sent to witness to me when I stood in judgement? And remember that you described Science as humans figuring out the wonderful work god has done?”

“Then how can you think that god didn’t send the vaccine?!? I think loving your neighbor means doing all that you can to slow the spread.”

He gave me a look; like a kid being caught cheating at Yahtzee     ... again.

“That’s what my daughter says," he said, almost to himself, "she’s a nurse.”

“Well, you should listen to her,” I offered, “that’s most important of all.”

And then I left him to steep in the weak tea of all his arguments; including trusting in god to get him through the Pandemic.