The Trouble With Precepts. 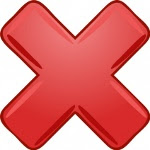 Posted by Bubba the Pirate at Saturday, April 28, 2012 No comments: