Steering Toward the Curves 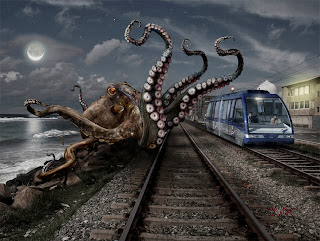 I struggled against the wind and rain, in the dark, driving across the cattle plains of South Texas. Squall lines roared in off the Gulf of Mexico. The inky, black emptiness of the prairie made the refinery lights look like cities across a big lake. Biblical torrents of rain filled ditches and slathered the road. Air cushion shocks make my ride nice and smooth, but with every gust of wind, the cab lurched on its squishy platform. Right after, the trailer leaned over like a schooner digging her leeward rail. Each squall line brought its own series of sickening double lunges.

Then two lanes funneled down to one and shifted off center in a construction zone. I hurtled through a swerving, narrow pass only a roller coaster masochist could dream up. There was mud and gravel to my left and a continuous line of Jersey barriers to the right. The rain gave everything a sinister reptilian slickness. In the skittering gleam of my headlights, it all rose and fell like the ribs of a cement and asphalt striped lizard.

Flying through, my forward motion animated the ruts and ravines of construction mud. A flash and crack of lightning woke the beast and tentacles of mud began to writhe. Every ditch was a mudbound kraken waiting to pull me into a slimy abyss.

On the right, the ghosts of a thousand traffic fatalities howled against the barrier surfaces; like hamsters clawing at aquarium glass. In their deafening silent screams, I heard the story of each hellish demise. Their agony could only be mitigated if my trailer clipped the barrier with a staccato ricochet and I joined their plaintive chorus after my own diesel fueled apocalypse.

In real life late night driving, if the tires on just one side of my truck got into that mud, I might as well be drug down by giant muddy tentacles. Likewise, in the pinch points of the curves, too tight a turn could cause the trailer to catch on a barrier. The impending disaster would be dramatic and just as likely acrobatic. I was hauling a light load down to McAllen, but still must have had 40,000 or 50,000 pounds of momentum twisting, turning and lunging.

When a driver concentrates too much too close, the tension builds with every yard of asphalt. Pretty soon, the steering wheel is jittering back and forth in a thousand desperate micro-corrections, while the foot unconsciously lifts off the accelerator. Every driver panics the first time through or they're lying about it.

You have to start with faith in the system. The construction workers are going to set it all up so that trucks can make it through. How could they not? Besides, a hundred trucks have already gone through ahead of you. If there is no wreckage blocking your way, they've made it.

After that leap of faith, the key is to take a deep breath, slow down a little if you must, and look a little further down the road. If you steer to the curves as they come toward you, rather than worry about what's up close, you will make it easily. Success comes with smoothly anticipating your way rather than reacting in a panic.

Life is a lot like getting through a construction zone at night – in the rain. Take a deep breath, trust you can get through and then steer toward the curves that are a little further down the road.
–
Image used without permission. Lifted from http://ozplasmic.deviantart.com
Posted by Bubba the Pirate at Saturday, September 21, 2013 1 comment:

A Wreck on the Highway

A small disc of fabric cartwheeled across the highway as I was catching the wrecker. We were just getting through Chattanooga, TN and the traffic was finally thinning out. My truck didn't quite have the oomph to pass in the mountains, so I backed off the cruise control and stayed in the granny lane.

The throttle governor that limits the speed of the truck can be frustrating. I'm not opposed to governors per se, but none are set at exactly the same speed. If you're behind a truck whose governor is just a half mile an hour slower than your own, you will catch up to it and feel like you need to pass. Trouble is if you're only going a half mile an hour faster, it will take you 10 minutes to get by the slower truck - on the flat. In the mountains of Tennessee, hauling a heavy load, passing was just not practical. After swallowing my pride and settling in behind the wrecker, I began to notice the debris. The wrecker wasn't towing anything but appeared to be following the truck ahead of him.

Little things catch my eye out on the highway. The wrecker hit a patch of road debris that scattered spectacularly. The clumps of fibers, some kind of stuffing, burst like a hive of snow snakes. Bouncing on an expansion joint, the truck in front of the wrecker scattered little clods of dirty that trailed dust toward the shoulder like they were smoking.

As we dropped into one of those beautiful Appalachian valleys, three or four more little pieces of fabric danced across the highway in a cascade of delicate sadness. It was then I squinted into the twilight, suddenly curious of the truck in front of the wrecker. I felt a pinch in my chest as his cargo came into focus. I could see it fine, even in the dwindling evening light, but my brain struggled to make sense of it. Unusual finger shapes, like an open hand slightly askew, trembled as they bounced down the highway. The truck, a flat bed, was carrying the nearly unrecognizable remains of a completely burned out semi tractor. Two corner edges of the sleeper were the anguished skyward fingers. In the hints of a cab, I finally realized the grim tale before me.

Did the driver survive? Was he inside when the fire started? Was it an accident? Were there others involved? I hadn't yet wired my CB radio, so I couldn't inquire. Either driver in the somber convoy would have had no obligation to respond anyway. I could only sit and wonder. The upholstery was burst open like popcorn, shedding swatches of fabric. The mattress, still in there somewhere, couldn't keep its own stuffing from jumping out in the wind. The smoking clods must have been ashes or the residue from fire extinguishers.

Passing a truck accident can give me pause, but following a wreck for over a hundred miles, I was quiet as a pallbearer for two hours. Unanswered questions rolled around in my head. All I could do was consider the possible explanations and openly offer my compassion and empathy as the silent forests buzzed by.

Naturally, I thought that could have been my truck. Three years ago, I had already driven a half a million miles. Now that I've started  driving again, I am back in this statistical pool. But this is not a preachy, stilted riff on being safer and more vigilant on the road. As I drove up I-75, following the nightmare possibility of the burnt cab, I was struck by the beauty of impermanence. The driving might be just a job, but the drive through the lush valleys and vivid green forests of Eastern Tennessee was beautiful. Besides the traffic and the hum drum of whatever it is each day, this job is a tour of wonder. Instead of sitting at a desk in front of the same patch of wall, or feeding lumber into the same machine all day, I get to sit here and watch beautiful sunrises, wonderful mountain vistas and stars reflecting on rivers.

I also see pollution billowing from smokestacks, trash along highway shoulders, and completely wrecked semi tractors. There is beauty and there are troubling sights, but all are impermanent. The Buddhist concept of impermanence is often misunderstood. Some think it must be a certain emotionless, Spock-like aloofness. In my opinion, to deeply accept impermanence is to cherish the beauty in each moment we have, in the people we're with, in whatever stuff we have – just then. Everything, and everyone, is impermanent and therefore all are beautiful. Just like cherry blossoms or fall colors, the allure is the beautiful sight that you were privileged to see at that moment. Whether you're driving a truck, working at a desk or feeding a machine, consider it a privilege. Shunryu Suzuki Roshi used to say “Just to be alive is enough.” Once each moment is seen as a privilege, one can relax and just enjoy life.
Posted by Bubba the Pirate at Sunday, September 15, 2013 1 comment: