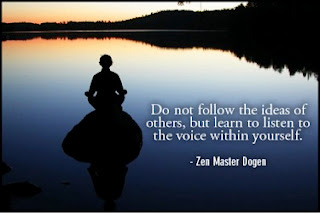 Today I was asked if I considered my Buddhist practice a religion or a lifestyle. After some thought, I believe that the frame of the question is incorrect. The question does not make sense to me in a meaningful way.

It is my opinion that a great many of the maladies that we suffer in our modern culture are caused by the fact that religious people often have lifestyles that completely contradict their professed beliefs. If a person is a true believer of a religion, their lifestyle should be directly affected by, and converge with, their belief system.

Consider right wing politics in the United States of America. The words Conservative and Christian are uttered so often together that "conservative" sounds slightly hollow without its proverbial suffix "christian." I felt a twinge making that previous sentence work in both directions. I know non-conservative Christians, I was raised as one. However, in politics "christian" is rarely heard without its prefix "conservative."

At first this might seem to contradict my thesis. These words are so attached in our lexicon that they must be an example of lifestyle and religion in parallel. However, look at some of the core teachings of Jesus Christ: love your neighbor as your self, love your enemies, refrain from hatred and lust, turn the other cheek, the meek shall inherit the earth, money changers thrown out of the temple and even the story of loaves and fishes. Now try to square even one of these teachings with capitalist economics as currently practiced in the our country and, thanks to our evangelizing, all around the globalized world. Capitalist economics is the economics of choice of so-called conservative christians. I know, I don't get it either.

I don't want to pick on one religion. There are examples in all religions where lifestyle and religion diverge, especially in a toxic mix that includes politics. Look at ethnic violence perpetrated by Buddhists against a Muslim minority in Burma. If we look at the hellish violence that the United States has perpetuated against whole countries in the Middle East, its easy to understand that "Muslim Terrorist" is an inaccurate, politically naive construct. Yet, there were many places in the world where, pre-globalized politics, Christians, Muslims and Jews lived together as peaceful neighbors for hundreds of years. Moreover in every branch of every religion somewhere there can be found a charlatan leading some number of people astray while profiting from their ignorance. Another very old cliche highlights the difference in behaviors between Sundays and Mondays.

My lifestyle was profoundly affected by my return to Buddhism. I have always enjoyed mixing it up with people and arguing politics, philosophy and religion; as if any of those are truly separate. Old habits die hard, but I am getting better. My religion and lifestyle began to converge when I came to understand that showing by example is more effective than telling with words. I can do more to improve the world by just living my life my way than I could ever do by arguing. Arguing seals another person's mind against what I am saying. There is very little hope in changing the world by words. The world can only change by the application of compassion and loving kindness.

When I was a hard core Atheist, people who believed in a god pissed me off. I could not understand how they could "believe" AND I wanted to convince them of the error of their ways. My success rate in converting others, by the way, was zero. When I began to realize that neither science nor religion possess a monopoly on understanding the world we live in together, I began to soften and eventually returned to the Buddhism I tried to study in college.

Further, my lifestyle was greatly affected by understanding, through my religion, that there is no separation between us, nor between us and the universe. Not only are we *all* made up of the same stuff, we all are the *same* stuff. It helped me to see that I was no different than the Christians who frustrated me. A step backward helped me understand that we are all asking the same questions just with different words. This realization allowed a crusty shell that I had worn for many years to crack open and crumble around my feet. It doesn't matter to me what anyone else thinks or believes because all their questions are my questions too. The dissatisfaction of an unexamined life is something all of us feel to some extent. With that my heart burst open and I could let everyone in because I knew they were all in there already.

My religion and my lifestyle are so intertwined, I don't know where one ends and the other begins. That being said, I am neither that good a Buddhist or a very good human. Yet, I know that if I have the whole universe in my heart it matters not if I am a good Buddhist or a good human or a good Muslim or a good anything. The illusion of separation is rooted in judgement. Being open and dropping the separation of me from the universe is not only more important than being good or right, it supersedes good and right.

This sounded to me like a good enough exuse to break out Jane Merchant's "The Stars and I" again. When she writes:

...  my heart swells up and my own boundaries dissapate.

The Stars and I by Jane Merchant

I want a hill to live on, lone and high,
Because, when I was small, I used to lie
Out on a hill at evening, watching stars.
I didn't care a bit which one was Mars.
I couldn't find the Dipper or the Bear
Or anything my elders said was there,
And why I should I couldn't understand.
It was enough to lie there and expand
Till all the stars were shining into me
And I was all the stars that I could see
In all the endless acres of the night.
That was the best of living. That was right.

The worst was going in to sticky gloom
And having to shrink myself to fit a room.
Posted by Bubba the Pirate at Friday, July 03, 2015 3 comments: