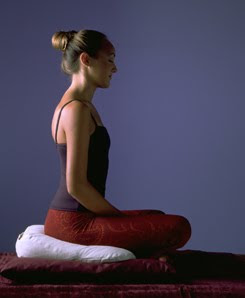 The incense wafted from the altar as I sat on a cushion in the meditation hall. People were arriving yet for the Intro Class. I had a small Moleskine journal for taking notes and had brought my Easwaran translation of the The Dharmapada as well. My well traveled old knees and hips were not happy about sitting on the floor, but had given up complaining. She walked by, catching my eye just as Sunim was sitting down to begin. Yeah, I know. Casting an eye in the meditation hall - not so cool, but biological and instinctual. Sitting on the floor, hearing her pad by on bare feet, I had looked up just in time to see her right cheek go by. A pretty girl with auburn hair tied back and a clunky pendant on a wide ribbon, she crossed the room and sat opposite me on the arc of cushions.

It was Week Two of "Buddhism Basics and Meditation." Ever since I began to meditate, I have struggled with 'Monkey Mind.' I can't decide whether its a hallmark of a creative person or its just me. I know I'm not alone in this affliction, but it's also just me. When I sit my mind races. All kinds of images, memories of old friends and old vexes, temptations and distractions seem to ooze from my brain like spit from a saliva gland. The Ego screams and struggles to maintain its domination. The opposite of procrastination, rather than mindlessly NOT doing what you had wanted to do, its doing and thinking and sweating about not doing or thinking. Instead of struggling to conjure sheep to count, its the incessant thundering of a hooves - thousands of bison, wildebeest and wild horses - pounding across your scalp - defying your efforts to just sit quietly.

A couple times, I turned to casually peek at her again. We all shifted our posture and struggled for comfort on cushions on the floor. When she stretched a knee and leaned another way, a tattooed foot popped out from under her other leg. Dammit, a painted lady. I struggled to not think about what other tattoos she might have. She was way too young for me and I am not on the make these days; especially not at the temple.

The lecture touched on impermanence, emptiness, and non-self; marks of the Dharma. The teacher spoke of the unsatisfactoriness caused by the ego's attachment to its nonexistent identity. Most of our problems are associated with habitual thinking about the 'permanent' self and its relation to other 'selves.' As Westerners, we can't seem to help but intellectualize. An unseen guy behind me had trouble with the impermanence of the past and spoke up. He chafed at the zen riddle answers. The gal with the clunky necklace chimed in as well.

She was smart and funny; perhaps even stubborn. Curious and struggling to understand, she questioned persistently. Her fair skin glowed when she felt the room's attention. With a smirk, she chose to agree - for now. Having let it go, she sat on her cushion in a casual mudra; the backs of open hands on her thighs. Sitting up on the meditation cushion with her shoulders thrown back, she seemed effervescent and eager. The loose t shirt and her hair pulled back accentuated a delicate neck and fine features.

After we'd meditated, Sunim revisited the strong discussions in a huddle. He made sure no one had taken anything personally. Afterward, we all chatted over tea and chuckled at our struggles to understand. As I threw on my coat to leave, the clunky necklace gal stood in the entryway talking to the guy who had also struggled with impermanence. I excused myself and passed between them onto the sidewalk.

"Have a good night, Todd," she called after me.

There is a certain lightness that men will understand. Perhaps, women know the same feeling but I don't think they are affected as strongly. It doesn't take much for a man. A random woman on the street might have smiled especially sweetly, or a waitress acted as if she actually found you interesting. In a flash, without the chance of stopping it, a man can imagine what she would wear on their first date, what kind of apartment they might rent together and the color of their kids' eyes. And then, like a nervous tic, or some kind of brain chemistry episode, it just passes. He is only left with the lightness, a brighter look to the sky, an airy feeling in his chest just below the throat. Its about the ego; the self. Its about feeling noticed, feeling important; about not feeling non-existent. Admit it, its about feeling good.

I stumbled toward my truck, just two car lengths away. My brain dumped all kinds of feel-good stuff into my bloodstream. She knew my name!?! How...?!? Have I talked to her before?!? She remembered, why can't I?? This is might be cool...

I stepped off the curb at my truck. Something caught my eye, like a coffee stain or a dollop of errant ice cream on my chest. It was the company logo on the left breast of my trucker jacket. I slid the key into the lock. As I opened the door and sat down, like the snap of a twig when you're all alone, it occurred to me . . . wait . . . also on my jacket, on the other side . . . my name - Todd. The hissing, farting sound of my ego slowly deflating briefly drowned out the noise of the city traffic. Aaahhhh, she read my name.

but . . . she was nice enough to say goodbye. The flatlining ego still trying desperately to resurrect itself. Holy Tachycardia, Batman, I have a lot of work to do.
Posted by Bubba the Pirate at Thursday, October 20, 2011 No comments: