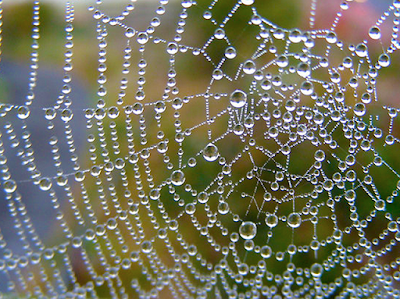 
The myth of Indra’s Net is used to illustrate the Buddhist concepts of emptiness and dependent origination. Everything in the universe, including each of us, is a pearl at an intersection of Indra’s giant net. Looking closely into an individual pearl, every other pearl is reflected in its surface.

According to the Buddha’s Dependent Origination, everything that exists, exists only in relation to everything else. My biological existence depends not only on each of my parents, but each of their parents and all our ancestors. Additionally, the person I am today is the result of everyone I’ve ever met, and all the things with which I’ve come into contact. This soaks out into the whole universe through the ancestors of everyone I’ve met and all the other things and people that they too have experienced.

Thich Nhat Hanh teaches looking deeply enough into a tangerine to see the grocer, the trucker, and the farmer. And then deeper yet to see, and even taste, the sun, the rain and the soil in the fruit. When I consider the causes and conditions that bring about the sun, the rain and the soil, I can begin to sense that everything indeed relies on everything else. When I look deeply enough at any one thing, I can see everything else.

Nothing, and no one, is permanent and the whole process of Dependent Origination begins again with everything and everyone now in my life. This unending process folds the entire universe in on itself with each passing moment. We are continually created and are helping to create everything else, every moment.

In my travels I often see a person standing by the road with a cardboard sign. If I’m caught by other traffic or the stoplight, often I sit uncomfortably in my truck, staring straight ahead waiting for the light to change. Much of the time I don’t have any cash on me anyway. I know I am not alone in this discomfort. I’ve walked through big cities and I’ve sensed my noticing of everything else, anything else, but the abject neediness. And what of the groups of people who are now being actively targeted and oppressed by the current establishment? Am I doing more than simple lip service? How can I be an effective ally? How do I not become overwhelmed by the avalanche of hate? How do I effectively and fully recognize the existence of all the other pearls on the net?

I believe that there is a latent sense in each of us that we exist only in relation to everything else. It seems obvious that some behaviors, like jealousy or embarrassment, come from some understanding that who we are is intricately dependent on the others around us. What must it feel like for someone that we choose not to see? Or to see differently? What ache must there be just to feel fully existed? Indra’s Net shows us the illusion of separation. When I don’t see the full humanity of that person on the street, there is a part of me I don’t see. When I think that someone who looks different or dresses differently is somehow actually different from me, I lose sight of myself.

Dogen wrote “To study the Buddha Way is to study the self. To study the self is to forget the self.” I believe he was speaking directly to this illusion of separation. He was pointing to Indra’s Net; pointing to everything I am, everything you are and everything that is that guy with a sign or anyone else. To ignore any one of those pearls rends our connections; tears at the net. Further, impermanence shows us that the pearls are a part of the illusion. Without a permanent self, our only real existence is in the connections of the net. Tearing at the net is tearing at ourselves. When I fail to offer someone the dignity of a recognized existence, I miss fully existing myself. My path to the Buddha way is directly interrupted.

Martin Luther King, Jr. practically paraphrased the Buddha in his book “Strength to Love” when he wrote “Hate cannot drive out hate, only love can do that.” There may not be any words more important than these in our current politics. We are stuck in this quagmire specifically because of hate battling hate. Eight years ago, we had an election that some could not accept. The loss of decorum began right away; from Joe Wilson’s “You Lie!” to the near complete obstruction that followed.

Now we are faced with an administration chock full from the top on down with people who have never had to be empathetic. They’ve never had to deal anyone they didn’t want to; never had even one of a whole variety of problems that most of the rest of us face every day.  The new president is a creep and certainly has never had to treat a woman with any respect. Yet, how are the cries of “Not my president” any different from “You lie?” I don’t like the man nor most of his policy prescriptions, but just like eight years ago, there was an election and he won. Lord help us but it is a constitutional fact that he is our president.

So what are we going to do about it? None of this is permanent. We are not stuck with this current situation indefinitely. Most of the people who voted for Donald Trump will not be forever loyal to him. I think many of them simply struck out at a system that had failed them; striking in the only tangible way that seemed available to them. And there really were a great many reasons to not support the other candidate.

In the long run, I propose that we need to break free of the two party system; or at least the two parties that we’re stuck with right now. In the short term, however, we have this less-than-perfect representative republic and this constitution. In order to move forward as a nation, we have to win some hearts and minds. We need to find ways of talking to  and working with people with whom we don’t agree. Not only does this take us right back to “Hate cannot drive out hate;” it takes us right back to Indra’s Net. It takes us back to seeing those others as a part of us and allowing them a recognized existence.

If I accept that a homeless person can sense my not-seeing them, then certainly in the emotionally charged arena of our politics our opponents know it when we dismiss them; dismiss their fears and aspirations. We cannot work together to solve this country’s problems without granting there are people and ideas we strongly disagree with which nonetheless have validity in a democracy. Certainly not all the ideas we’ve heard should be tolerated, but we cannot say that there are no valid concerns in the rank and file of those voters.

I am not saying that we should support President Trump and his administration. They, along with their allies in the Congress, are undoubtedly in the process of overreaching. They act as if they won a mandate when the Republican president lost the popular vote -- again. I am suggesting that democracy is messy and it functions only through compromise.

Those friends and neighbors of ours that supported the other side have valid fears and aspirations that are different from ours. We need to give them the space to feel comfortable. They must willingly come back to negotiating with the rest of us toward shared solutions to our shared problems. They must be allowed to exist in this messy world along with us. The only way forward is working together. The success of this American experiment depends on wholesale changes from the current unresponsive system. Massive changes will only be successful if we have well more than fifty percent of the country behind the movement.

I am more confident in the ultimate strength of our core principles of democracy than I am afraid of this new regime. This Republican unity is fragile. It won’t take much to upset their giddy honeymoon. Nevertheless, we need all the help we can get to change the dangerous course on which our country suddenly finds itself.

My biggest concern is the aftermath when Trump defaults on most of his myriad campaign promises. The objective reality is that he cannot accomplish all, perhaps any, of the things he has promised. Some of the bigger promises, like the return of manufacturing jobs, are so far beyond his control that a many of his supporters will soon be disillusioned, disappointed and angry. I fear that in that fragile bewildered moment, some truly nasty character we haven’t yet imagined will step in to replace Trump as the savior of so-called white working class. Whoever that might be will be worse, and stronger, than Mr. Trump. The bewildered and frustrated remnants of Trump’s movement will be in no position to think clearly and that moment will be ripe for things to get much worse. Our greatest duty in the coming months is to create a comfortable space for those people turning away from Trump to fall toward the center so they are not drawn further to the right.

For those voters bitterly disappointed by the status quo, there was clearly one candidate that was a continuation and another that was a break from the past. The more we howl at the horrible choices that were made, the more likely those hearts and minds will bind up and those ideas reflexively defended.

And, of course, if Indra’s Net includes everything and everyone in the universe, it includes Trump and his gang of deplorables. Regardless, they must not be allowed to tear the net in half. We must vigorously oppose the regressive policies of the Trump Administration while simultaneously allowing many of those who supported him to live and breath among us. I believe we must strive to strengthen the safety net of our human connections in order to maintain room enough for those who seek to rejoin us. When they turn away from the abyss, we must fully welcome them.

“Everything changes, Everything’s connected, Pay attention.” This isn’t permanent, we can make it better; we need to work together in a broad coalition; and we must carefully distinguish between vigorously opposing the policies of this new administration while being careful to be inclusive of those who will begin to turn away from supporting the President.


---
image used without permission from https://www.scienceandnonduality.com/the-indras-net/
Posted by Bubba the Pirate at Wednesday, March 01, 2017 No comments: