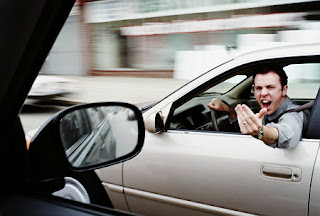 There is an old zen saw that 'you should meditate for a half hour every day, unless you think you're too busy then you should meditate for 2 hours.' Another old saw says 'every little bit counts.' The trouble comes when even the little bits don't happen. The good news is you will soon realize just how good that meditation you are no longer doing is for you.

I've written about road rage before; I had it figured out. My busy life, however, had gotten in the way. Alright, more accurately, I had let my busy life get in the way. The meditation bench that I had built was helping this old body sit still for longer periods and my morning meditation had nearly become a habit. Then a good stretch of overtime at work and habits started to slip. It's hard to remember to get to bed before 8:00 pm. When you're getting up between three and four in the morning, eight o'clock is not really even soon enough.

I don't like to be rushed, so my practice was to get up early enough to have a meditation and cook some breakfast. Of course, I also tend to get involved in too many things. There were meetings, to-do lists, writing and reading. Pretty soon, I was cutting corners at each end of my sleep cycle. I started stretching to nine or nine thirty before I was in bed. When I got up in the morning, it was just in the nick of time to crash through breakfast and out the door. At a certain point, I had lost the morning meditation habit altogether. I still meditated, but not with any regularity.

Then it happened. I turned out on to 36th Ave. to get to Chicago Drive, the main thoroughfare on my, and many other peoples', way to work. There was lots of room between my turning and the guy who was coming down 36th, but I suspect he didn't think so. To add insult to his injury, I dared to come to a complete stop at Chicago Drive to look before turning into 55 mph traffic. When I did turn, the minivan roared around me to pass. It was the perfect moment to smile and let it all go, but this is Michigan where we take cars and driving seriously. I punched my own accelorator to the floor.

With some glee, I noticed the left lane had not yet been plowed. That bum to my left was careening through the icy nastiness still trying to pass me. I kept on him (or her, who knows). For more than a half mile we were neck and neck like some 1950's drag race song, except it was dark and icy and we were just two old poseur dudes on our way to punch the clock at five in the morning.

Somewhere north of ten over the speed limit, the lumpy vomit stain of stupid started to soak into my ass like I had sat on the wrong spot of couch at a frat party. This is not who I want to be. This has not got anything to do with my real life. This is jsut two guys showing off the ravages of anger, greed, and ignorance. What did it matter to me that someone else decided to drive like an idiot? What did it matter that I was childish enough to respond? What difference did it make to the world?

The difference it makes to both of us, and to the world, is karma. Karma is not the proverbial cosmic balance sheet that most Westerners think. Karma is more a momentum where doing good makes good deeds easier. Conversely, doing bad deeds makes more bad deeds more likely. Pretty soon it's a landslide in the wrong direction. This works on the universal level as much as the level of the individual. Our foray into road rage was simultaneously the result of, and a precursor to, more stupidity. That morning, each of us contributed to making more anger, greed and ignorance in the universe.


==
Image taken without permission from Bostinno.

Posted by Bubba the Pirate at Saturday, March 23, 2013 No comments: