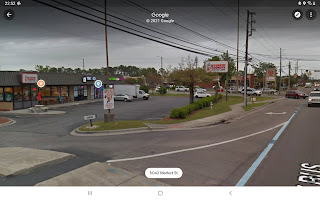 I don’t claim to be a good person, least of all better than anyone else. In fact, I am not as good as I should be more often than I’d like to consider. However, I would like to illustrate how an average schuck like me can do some good once in a while. After I had let my heart open more fully to someone else’s humanity.

A major intersection in Wilmington is the corner of Market Street and New Centre Drive. Not only is Market Street one of the main routes into the city, but right near that corner are a half dozen motels, a Hooters, a Bonefish Grill, an Olive Garden, a KFC and a Chic Fil A, a Target, a Petsmart, an Academy Sports, a Dunkin Donuts, and the plaza with my favorite little family-run sushi place. Not that far away are Costco, Walmart and Lowes. It’s never not busy around Market and New Centre.

Market is the main drag and New Centre the feeder. On each side of Market, where people are waiting to enter the stream, a couple of guys always stand there with their cardboard signs. Lately, I have been sizing them up and they have not qualified for my sucker fund. Learn about the sucker fund here. Both guys are fairly clean shaven, neither is sunburned, and their shoes are decent. These are things that I look at before I pass some cash.

Another reason why I haven’t tapped the sucker fund is that I am out of cash. I’m not out of money, though I run leaner than most of my friends could stand to know. It’s just that I have very little cash; next to none. Two Fridays ago, someone tried to use my debit card number in Florida. My credit union is great about fraud and I got a text asking if a certain transaction had been me. I replied “NO” of course, but what that meant was that my card was locked ... turned off. The Fraud Department let me get some cash the next morning. It was like a Bond movie. I called them, standing next to an ATM: “I’m here at the Walgreens in Leland.” They turned my card on while I took out some cash and locked it back up as soon as I told them I had it in hand.

This was all a pain in the ass because I still ‘bank’ with a credit union in Michigan. They said it might be as much as two weeks for me to get a card in the mail. And … they will only send the card to the address on the account. Guess what? I still use an address in Michigan! Mostly because my CDL has to have a residential address and I’m not going to be in one place at a time for very long for the foreseeable future.

Along comes my sweet sister. When I was on the road truckdriving, I put my sister’s name on my account in case something needed to be handled at the credit union while I was out of town. After a few days of trying to figure out what to do, I was lamenting my situation with her and she volunteered to get me a debit card in person at the branch and mail it to me. In the days of ‘chip cards’ I wasn’t even sure that was possible, but it worked.

I just had to last a week and a half on one daily limit ATM withdrawal.

So, even though I was shamefully judging the guys standing at the corner, it had been about nine days without a debit card and I didn’t have any cash to give them anyway.

Further, we expected that I would have the new card by Friday or Saturday. But mail is weird around here. Not only are we served by a rural, small town Post Office, but where I can get mail, two businesses share the same address and mailbox at the end of a dead end road. Friday afternoon, the boatyard office closed before I got back. However, I saw the office manager on her way home. She offered to go back but knew that I hadn’t received an envelope yet. She encouraged me to check the mailbox on Saturday as she knew my situation.

It didn’t come Saturday either.

On Monday, I made it back for the usual office hours, but something was up and everyone had already left. The mailbox had been cleared. I had a little food left and a little gas, so I wasn’t worried. I had money. I just couldn’t get to it.

This morning, I was down to a couple peanut butter and jelly sandwiches for lunch at work and didn’t have any more fruit, but I had a revelation. My Dunkin Donuts app is connected to my Paypal, not my card! Yes, I’m too old to be a hipster, but occasionally I use their stuff. I could order lunch and then go get it; walk-in service, grab and go. However, the menu is all breakfast stuff except a section called Snacks. “Snacks” sound small.

I’ll take two of those. Oh, and two of those and an Iced Matcha Latte. A little crazy but it beats PB&J … again.

I hit “Place Order”, squared my clipboard on the shelf I was counting, washed my hands, waved to the boss, and took off for lunch. As I mentioned, Market Street is crazy at all hours of the day; especially lunch time. But I had taken an early-ish lunch and managed to make my way down to the nearby Dunkin in no time. As I walked in, I spotted my bright green latte and watched the girl lift this large bag, stuffed full of food up to the counter.

It was then that I thought about cheese.

Lately, I don’t eat a lot of animal products. I’m not perfectly plant-based now, but I’ve been plant-based before, and I’m working my way back. It’s just that the boat and my side gig take up so much of my week that I take shortcuts and make compromises. I get lazy and make poor decisions. Most often I regret that I don’t have a few more hours in a day and a little more discipline. Anyway, I had ordered two cheesy croissants and two ham and cheese snack sandwiches to go with my latte. All that cheese was already weighing on my mind [pun intended]. I hefted the bag, grabbed my drink and pushed back out the door.

The corner is so busy that you have to plan your approach based on which way you’re headed. I drove around the Dunkin building, crossed a motel parking lot, and approached New Centre Dr. in a way that I could easily turn left on Market and get back to work. And … I began munching on a Cheesy Croissant.

I jumped through a gap in traffic to cross two lanes and get into the left turn lane. It was then that I saw the usual guy standing there with a particularly large cardboard sign which I didn’t read. My first reaction was to avoid eye contact, but I also decided not to munch on my ridiculously bougie snack while I was in front of him at the red light. Then I remembered it had rained on my way over. The guy was soaking wet and so was his sign. Granted, it had been an unexpected southern summer squall. It had come and gone, but he was still standing there. His expectant, yet humble expression was still the same. And here I was, all judgy, sitting in my campervan with no money, but also no air-conditioning in the dash. Hence, my windows were down. We were five feet apart and sharing the same air, thick from the recent downpour. Even if he was running a scam, I was a fool to judge him. Up close, he wasn’t that well groomed. His shoes were dirty and his clothes were decent but just presentable.

He probably didn’t expect much from a guy driving an old campervan who obviously couldn’t afford to fix his air conditioning. Everyone else he meets is probably obscured through window tinting. I was sitting there, right next to him, with my arm out the window.

I have a good heart but sometimes it gets buried in all the sawdust and epoxy. It took a while for me to realize that I could do some small thing for this guy. It doesn’t have to be money. Sometimes just a hello. An acknowledgement. A little humanity.

I nodded to him and smiled. He smiled back.

Then I thought of the sandwiches. I didn’t need all that ridiculous food that I was going to regret anyway.

Just before the left turn arrow went green, I reached into the bag.

He lit up, gave me a much better smile, and, thanking me, took the sandwich. God bless you, he said. As I pulled away, I watched him put the sign under one arm, and stuff the sandwich into his backpack.

My lungs emptied. I should have given him the whole bag.

Back at work, I ate too much of that bullshit bougie fast-food. PB&J would have been such a better choice. All afternoon, I carried the weight of all that damn cheese and some heavy thoughts too. I know better than to look at someone’s shoes and decide I know their game. Hell, I don’t even know mine most of the time.

Tuesday. For the second day in a row, I left work at the stroke of 16:00 like some rotten clockwatcher. But I needed to buzz through traffic to try and get to the boatyard while the office was still open. I called to check. This time there was a box of boat parts and an envelope waiting for me.

I had had five bucks in hand for the last 36 or so hours. I had enough gas to get to work Wednesday, but I wasn’t sure about getting back again. I wasn't going to starve, but my pantry was lacking.

With card in hand, I ran into town for some gas and some lunch materials.

Life is back to normal; whatever that is.