Slimy Ball Bearings on the way toward Enlightenment. 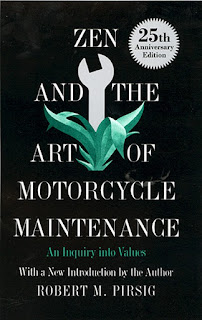 Just a few years ago, after more than fifteen years as a hard core atheist and scientific materialist, I was on the cusp of shedding the crusty shell I had been living in. After the long and winding road of my seeking, I was convinced that neither spirituality nor materialism, on their own, could answer all our human questions. I was working with a life coach, and one of my goals from those sessions was to re-read Pirsig’s ‘Zen and the Art of Motorcycle Maintenance.’ I was curious to revisit a book that had once been extremely important to me, but one that I felt I had left behind for new ways of thinking. The book had practically ruined my sophomore year at Michigan State. I didn’t want to talk or think about anything else. Seeking out that book was an early sign of Buddhism returning to my life. All the other books on Buddhism that I had collected back in my dorm days had been lost along the way.

Another more recent important book was Eckhart Tolle’s ‘A New Earth.’ My coach, Kathy, had sent me a copy. In ‘A New Earth,’ Tolle describes his theory of the Pain Body; a psychic parasite made up of self-destructive habit patterns. It is a powerful unconscious force with great momentum that seeks to continue those bad patterns and bring us pain. He described this thing like a separate entity inside us, laying dormant waiting for a trigger to set it off. It’s main mission is to absorb and magnify the negativity in our lives. Tolle described the ‘behavior’ of the pain body and how even other people can sense it. His most compelling example was about someone walking into the room and changing the mood in a way that everyone notices. I think we have all experienced something similar. Tolle would say that person was suffering from a particularly active Pain Body. A strangely disturbing recent experience had reminded me of this kind of other entity.

Now any good atheist would scoff at a concept like the Pain Body. Luckily, I was no longer a very good atheist. There were moments, however, when I wanted to throw the book across the room. Mostly out of respect for Kathy, I kept reading. I knew I was learning excellent skills from her that were already helping me change my life.

Honestly, Tolle had convinced me this pain body did indeed exist in some form. It was useful to talk about the pain body like it was an actual separate entity even if, in practice, one only believed that it was a good explanation. The helpful explanation was more useful than quibbling about the biological facts or metaphysical proofs. When the thought rolled through my head that if a concept, like the pain body, could accurately explain something experiential and even lead to good hypotheses about how to deal with those experiences, then it must be considered to be true in some sense of the word.

This loosy goosy interpretation of ‘truth’ would have been deeply offensive to my former atheist sensibilities. It was literally that thought -- that moment -- when I knew for certain that I was no longer the same as I had been before. I knew for sure, right then, that I was no longer an atheist. And further, I was pretty OK with that. I hadn’t fallen down on my knees before some unearthly power, but my view of the universe was expanding.

Fast forward a few years, I found a temple during my time in Grand Rapids. I began to take Buddhism rather seriously and took part in the new temple’s first lay ordination ceremony when I accepted the Precept Vows with several others. Taking the Precepts is similar to a baptism or a confirmation. It is essentially a public ceremony in which one declares their intention to live a Buddhist life. The Grand Rapids Buddhist Temple and Zen Center is still a very important place for me. I have been practicing meditation, on and off, ever since. 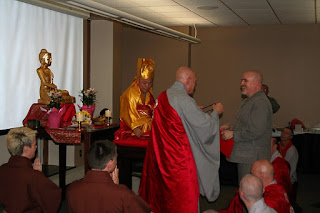 When I went back on the road driving a truck, I was back on completely irregular life and sleep schedules. Lots of simple things like sending a card or paying a bill are much more complex from the road.  As a result, my sitting practice went on hiatus for a time. I’ve just written about my joy in getting back on to a regular practice schedule.

Just recently, I had a very strange experience while meditating. One disadvantage of having moved away from what I still consider my home temple, my teacher and my sangha family is that I am far away from any guidance or discussion. The onus was on me, however, and I haven’t called anyone or sought out any help. Nevertheless, I feel it ended well anyway [keep reading].

I’ve had bad times on the cushion before; everyone has. My knees have cramped, my legs have gone restless, my brain has been either foggy or like a monkey on meth. It’s rather amusing to come off a 14 or 15 hour day, exhausted, and try to meditate. I’ve come close to just tipping right over dead asleep.

This particular day last month, however, was different. My body was restless. Pain and cramps appeared here and there. A leg or an arm would spontaneously and autonomously jerk out of place and I had the willies under my scalp. There seemed to be nothing I could do to stop it; and it seemed to be coming from some “thing” than me.

It wasn’t unlike an unfortunate night in the dorm. I don’t remember what was going on in my life. Better yet, I do remember that it didn’t take much of a reason to need to lose control in Holmes Hall in the mid-Eighties. That night I didn’t ‘pick a poison,’ I chose them all. It was a shock and awe chemical invasion; beer, whiskey, tequila and who knows what else. At some point in the evening I realized that I really didn’t feel very well if I was sitting still. It was better, or at least tolerable, if I was moving around. I distinctly remember a feeling like thousands of slimy ball bearings moving around under my skin; surging and flowing. It was kind of gross, but it was way worse if I was sitting or standing still. I started to wander the halls just to maintain my sanity. Sometime around 4:00am, my none-too-amused roommates tracked me down on the fifth or sixth floor of the dorm building next door to ours.

Back to my recent afternoon, sitting in meditation in a sleeper cab truck at a truck stop, I was feeling things inside me again that were not natural; not a part of me. I don’t know if my reading about the pain body contributed to my imagination or whether, in the long run, the reading helped me name it and then deal with it, but I had the sense that my ego was trying to sabotage my practice. It was rather scary but I could feel something -- something else -- writhing inside me like it was trying to regain the upper hand. Even writing it now, I don’t know what any of this means or if it needs to “mean” anything at all.

In previous meditation sessions, if I was going to fall over asleep, I would just stop the meditation timer and go to bed. Other times, when it was a just sore knee or the monkey mind, when I should have stayed at it, I often quit and did something else. For some reason, as this thing within me squirmed and silently howled in anguish, I decided to keep at it; to just sit there.

I might not have been able to stop my limbs from moving around, or stop the gyrating mental distractions, but I was going to stick it out. I was going to just keep watching my breath. Isn’t it funny that when I breathe in, it’s just ‘air,’ but when I exhale, it’s ‘my breath?’ Still, right then, my breath seemed like like the only thing that I knew for certain was me. I was going to stay with that until that god damned chime went off.

I was exhausted when my meditation timer finally chimed. Why it had been so difficult, I had no idea. I didn’t feel any emotion, not jubilant or relieved etc. I didn’t really think about it that much once it was over. My breaks on the road are only ten hours or so. Often when I’ve been doing something else on my break and realize it’s getting late, I just need to drop what I’m doing and try to get some sleep. That’s what I did that night. Sleep came easy after the mental wrestling match.

It wasn’t until I sat down again the next day. When I returned to meditation after that strange session I had a whole new sense of it. Meditating had not always been easy for me; bad knees and a creative mind. I just do what I can when I can, but have always felt like I should sit more often. There was something else, however, that I didn’t recognize. My meditation had an incomplete sense that I had not been aware of. Sitting again, suddenly, it was just me, just sitting. It was as if I had finally left everything behind. I hadn’t known it before but until then, on my own or even all my time at the temple, my meditation had been me … and the timer, and my schedule, and all the stuff in my life and in my head. I had always meditated with my whole life sitting there in my lap. And now, at least in that one moment, it was gone.


This new aloneness was freedom. I don’t have it every day, but I feel like I’m sitting by myself now. I can sit through the session, just me, until I hear the chime. And then life comes back gently. It seems to be much less like two separate mindsets; one in meditation and one living a life. I’m not trying to brag or teach, I just wanted to share this new opening I’ve found; perhaps encourage others who seek such openings. Then again Kodo Sawaki always insisted that meditation was good for nothing.
Posted by Bubba the Pirate at Thursday, February 02, 2017