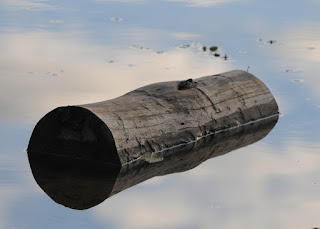 I've been meaning to write a post describing working on the highway as a crucible of reactivity. Out here on the mean streets, there are clueless drivers, texters and just plain bad drivers. I was going to suggest that some of these drivers, fourwheelers and other truckers, were endangering the rest of us. It was going to be obvious that some righteous indignation was appropriate. Actually, I was trying to justify my own righteous indignation; my overreaction.

As a truck driver, I'd had a couple close calls driving aggressively and long ago decided I better lay off. I first fixed that by aggressively preventing other drivers from being aggressive. Sounds logical, right? Eventually, I just went through a phase of really resenting the drivers who were aggressive, or ignorant of the finer points of traffic law, or just plain stupid. Really, it was about how I was a better driver than them. It was probably always something like that. Finally, I've reached the point where I am just bewildered by how some people drive. I'm not perfect, of course, but I've improved my intention.

The “crucible of reactivity” was going to be the perfect excuse for me occasionally losing my shit behind the steering wheel. Every once in a while it still creeps up on me.
And then I heard an old Zen story. Old Zen stories will always get you. The good ones are so stripped down, so human, that you can immediately recognize yourself in one of the characters. This Zen story is in two parts. In the first, you are out fishing in your canoe when you start to feel a little sleepy. You drop an anchor and lie down to take a quick nap. Just as you're about to drift off to sleep, you feel a great clunk and jump up to see that another fisherman has carelessly run his canoe into yours. “What the hell are you doing? Are you stupid? You're a danger to all of us out here!" [sound familiar?]

The second part is nearly the same, you are out fishing in your canoe when you discover that you're a little sleepy. You drop an anchor and lie down to take a quick nap. Just as you're about to drift off to sleep, you feel a great clunk and jump up! “What the … oh.”  Its a log that has drifted down the river and bumped into your boat. You lie back down and take a peaceful nap.

We can't. We also don't have any idea what is on the other fisherman's mind or what's going on in his the life. There are a thousand things that could be on his mind; stressing him to distraction. Can we blame him? Can we expect him to do what we want?

Then why are we willing to give the log a pass and not the other fisherman?
Posted by Bubba the Pirate at Saturday, September 24, 2016